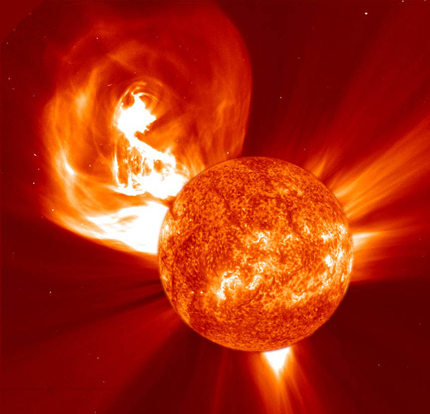 Solar eruptions, like this coronal mass ejection on January 4, 2000, produce huge bursts of electrical energy. If these blasts are directed at Earth, they can wreak havoc on sensitive electronics. (Credit: SOHO [ESA & NASA])

Generally, when sunspot activity increases on the Sun, the intensity and frequency of auroras increase on Earth. This cause-and-effect relationship exists because of the solar wind, a steady stream of protons and electrons that flows outward from the Sun in all directions.

Scientists monitor the speed and density of the solar wind to better understand and prepare for changing space weather conditions.

When the Sun is inactive, the solar wind is relatively calm, producing moderate auroras in northern latitudes almost every night. However, the sudden emergence of a sunspot, solar flare or a coronal mass ejection can change the space weather and aurora forecasts in an instant. These events generate huge solar storms with bursts of energy that accelerate the solar wind to speeds of over a million kilometres per hour. If an intense solar wind is launched towards Earth, the charged particles will trigger spectacular auroras but could damage satellites in orbit and knock out power grids, radio communication and GPS systems on Earth. Solar storms also pose a serious risk for astronauts.