The Violent Sun: Types of Solar Activity and Solar Maximum 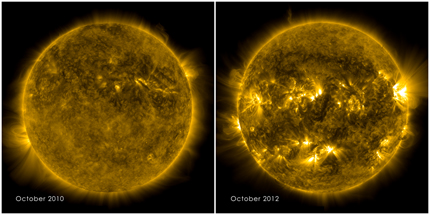 The image on the left shows a calm Sun from October 2010. The right side, from October 2012, shows a much more active and varied Sun as it moves closer to peak solar activity, known as solar maximum. (Credit: NASA/SDO)

One type of solar activity that can produce an increase in auroras is a sunspot. Sunspots are regions of the Sun that are cooler than surrounding areas (about 2000 degrees) and are easily identified as dark areas on the surface of the Sun. Sunspots form when the Sun's magnetic field becomes twisted. The Sun's equator rotates more quickly than its poles, which creates bubble-shaped magnetic knots that trap enormous amounts of plasma inside. These bubbles eventually explode, sending fiery jets of electrically charged gas into space. This strengthens the solar wind and increases the chances of spectacular auroras on Earth.

Scientists have noticed that sunspot activity tends to follow a regular cycle that peaks every 11 years. This peak is known as solar maximum. Skywatchers should see more vibrant and frequent displays of the northern lights during solar maximum.

Solar flares can give off sudden, localized blasts that can last from several minutes to a few hours, and are as powerful as thousands of hydrogen bombs. 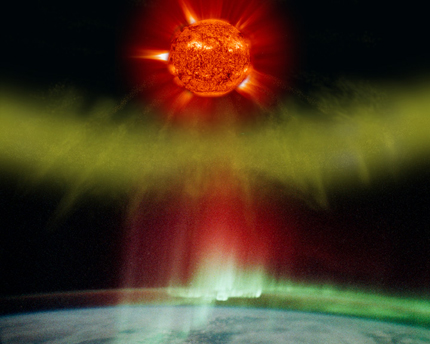 Illustration of a particle cloud from a coronal mass ejection impacting Earth and creating aurora (in actual photo of aurora as taken by an astronaut on the International Space Station). (Credit: SOHO [ESA & NASA])

Coronal mass ejections—the largest explosions in the entire solar system—can send 10 billion tons of plasma speeding through space, creating shock waves that can be damaging to electronics on Earth. This can lead to interference with GPS devices and can scramble radio and cell phone communications. In March 1989, a major solar eruption even knocked out Quebec's power grid, leaving six million people without electricity.