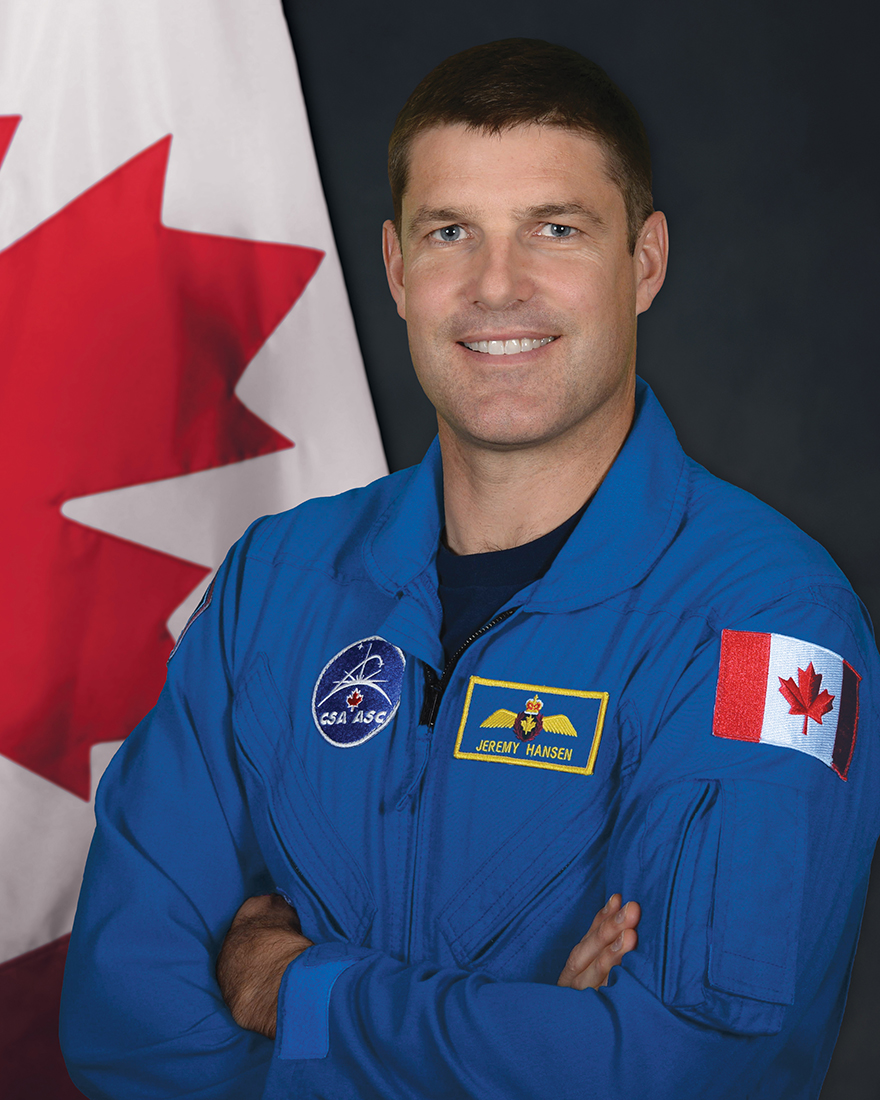 Personal data: Born January 27, 1976, in London, Ontario, and raised on a farm near Ailsa Craig, Ontario, until moving to Ingersoll for his high school years. Colonel Hansen is married with three children. He enjoys sailboat cruising and racing, rock climbing and mountain biking.

Education: Colonel Hansen holds a bachelor of science in space science (first class honours) from Royal Military College in Kingston, Ontario (1999). He earned a master of science in physics from the same institution in 2000, with a research focus on Wide Field of View Satellite Tracking.

Experience: Prior to joining the Canadian Space Program, Colonel Hansen served as a CF-18 fighter pilot and held the position of Combat Operations Officer at 4 Wing in Cold Lake, Alberta. His responsibilities included ensuring the effectiveness of NORAD Air Defense Operations and the operability of Deployed and Forward Operating Locations (Bases).

Colonel Hansen's flight experience began at the age of 12, when he joined the Air Cadet Program. He obtained both glider and private pilot licenses through this program by the age of 17. This training led to his acceptance to Collège militaire royal in Saint-Jean-sur-Richelieu, Quebec.

While waiting for a flight assignment, Colonel Hansen represents CSA at NASA, and works at the Mission Control Center as Capcom — the voice between the ground and the ISS.

In addition to his day-to-day work, Colonel Hansen remains committed to building and maintaining his skills; he takes spacewalk and robotics training while continuing to learn Russian. He has taken part in geological expeditions in the High Arctic and participated in the European Space Agency's CAVES program, during which he lived underground for six days. He was also a crew member for NEEMO 19, where he lived and worked on the ocean floor in the Aquarius habitat off Key Largo, Florida, for seven days simulating deep space exploration. Colonel Hansen also continues to fly the CF-18 fighter jet with the Royal Canadian Air Force and had the privilege of inspiring young Canadians by flying the historical Hawk One F-86 Sabre jet.

What motivated Jeremy Hansen to become an astronaut? What is the best career advice he's ever received?

Why did you want to become an astronaut?

The idea of exploring new places and accomplishing the seemingly impossible excites me. Being an astronaut affords the opportunity to be part of an amazing team that creates solutions for complex problems. To do something that has never been done before means that your team is very likely to face failure. I like the fact that in space, we are committed to bold goals to the extent that we will not let periodic failure stop our forward progress.

What motivated you to study in your fields?

I studied space science at the Royal Military College, as I wanted to understand more about orbital mechanics and how to design systems to work in the harsh environment of space. It was a fascinating field of study. I didn't realize it when I chose space science, but as I learnt more, I was fascinated by the endless possibilities to use unique orbits and satellite infrastructure to deliver services to humans around the globe and to better understand planet Earth.

What was your previous job?

I joined the Canadian Forces at the age of 18, completed my undergraduate and graduate degrees at the Royal Military College of Canada, and then started military pilot training. I was selected to complete CF-18 fighter jet training at 410 Squadron, following which I completed two tours with 441 and 409 Tactical Fighter Squadrons, where I learned to employ the CF-18 across a variety of different missions.

What did you like best about your job and how has it prepared you for a career as astronaut?

Flying fighter jets was an exciting career given the diverse challenges it presented. CF-18 fighter pilots fly alone in their individual aircraft but always as part of a team of aircraft. Anywhere from two up to dozens of aircraft working together depending on the mission. The extensive practice, commitment to constant improvement, teamwork and risk management in a very dangerous environment are skill sets very applicable to the role of astronaut.

Accept and appreciate where you are, stay in the mindset of creating solutions to the challenges you face, and find happiness in every day.

When striving toward your goals, seek out paths that are of most interest for you. When you are doing things of great interest, you will generally perform better, contribute more and have more fun doing it. This was the essence of the advice Chris Hadfield gave me when I was at the Royal Military College aspiring to be an astronaut.

I had a number of teachers who fuelled my inquisitive nature by teaching me to enjoy learning through problem solving and reading to further my understanding. They also developed my patience to sit with problems that I couldn't easily and intuitively solve. They took a long-term approach to developing me as a life-long learner. I was not memorizing for a test or exam; I was learning how to learn. I use that skill set every day now (still working on it).

I've been a big fan of the Star Wars series since I was young, and I enjoy watching the series with my children today. There are many great life lessons buried in the stories as the characters face many great challenges. They must summon the courage to stand up for others, value the greater good over their own well-being, and of course, I was enthralled by the magic of the Force! Plus Han Solo and Chewie just make me laugh.

I don't read much fiction but someone suggested that I read The Martian by Andy Weir, and I absolutely loved it. Specifically, I appreciated that Mark Watney essentially knows the odds are such that he will die on Mars. But regardless, he is committed to survive or die trying. He stays in a creative mindset and just keeps solving problems one at a time. He has no clue how his efforts could all add up to success, but that doesn't stop him from working towards his goal. That is a great way to view life. Akin to the quote by Martin Luther King Jr. — "You don't have to see the whole staircase, just take the first step."

I have explored a number of places in the Canadian Arctic, including some well-preserved meteor craters there. I fell in love with the rugged and untouched beauty of the tundra. I was amazed at the resilience of the wildlife and fauna that create an existence there in such a challenging and seemingly barren environment. There is something inspiring about the Arctic. Those who have visited know exactly what I am describing.

Many of our family's personal possessions were destroyed when our Houston home was flooded. It helped us realize that the physical stuff we collect just doesn't matter that much. The exception to this was our photos and journals. Most all of that was spared, and we were very grateful to still have those items to help us remember and visualize the people who have been in our lives and the great adventures we've been on. Some of the journals from our children's early years were flooded, but a friend painstakingly dried them out page by page and returned them. It was one of the kindest gifts we've ever received. While these photos and journals are not super important in and of themselves, they are great reminders of the importance of people and connection in our lives.