The Phoenix Mars Lander was the first mission to explore the Arctic region of Mars at ground level. Phoenix was launched from the Kennedy Space Centre aboard a Delta II rocket at 5:26 a.m. ET on August 4, 2007. It landed near Mars's northern polar cap on May 25, 2008 in an area known as Vastitas Borealis, where it continued to operate successfully for more than five months (far beyond its planned 90-day ).

The Phoenix Mission marked the first time that Canada, as a nation, landed on the surface of Mars. Canada's meteorological station recorded the daily weather at the landing site. It measured Mars' temperature and pressure, and probed clouds, fog and dust in Mars' lower atmosphere. Most significantly, the weather station confirmed that it snows on Mars by detecting snowflakes falling from clouds about 4 kilometres above the spacecraft's landing.

Phoenix used its 2.35-metre robotic arm to dig samples of the Martian soil for analysis in its on-board laboratory. Among early results, it verified the presence of water-ice in the Martian subsurface, which NASA's Mars Odyssey orbiter first detected remotely in 2002. Phoenix's cameras also returned more than 25,000 pictures from sweeping vistas to near the atomic level using the first atomic force microscope ever used outside Earth.

Phoenix's preliminary science accomplishments advance the goal of studying whether the Martian arctic environment has ever been favorable for microbes. Additional findings include documenting a mildly alkaline soil environment unlike any found by earlier Mars missions; finding small concentrations of salts that could be nutrients for life; discovering perchlorate salt, which has implications for ice and soil properties; and finding calcium carbonate, a marker of effects of liquid water.

The Phoenix Mission marked the first time that Canada, as a nation, landed on the surface of Mars. Canada's contribution to Phoenix was a meteorological station recorded the daily weather at the landing site. The weather station performed successfully throughout the mission, beginning just hours after landing. The weather station measured Mars' temperature and pressure, and probed clouds, fog and dust in Mars' lower atmosphere. Most significantly, the weather station's lidar instrument confirmed that it snows on Mars by detecting snowflakes falling from clouds about 4 kilometres above the spacecraft's landing site. The University of Aarhus in Denmark's wind sensor, known as a "telltale," perched at the top of the meteorological station's mast, also measured wind speed and direction and detected the presence of at least one dust devil at the landing site.

The Meteorological Station had:

The Phoenix spacecraft and the Canadian components: the lidar and the MET mast thermometers. 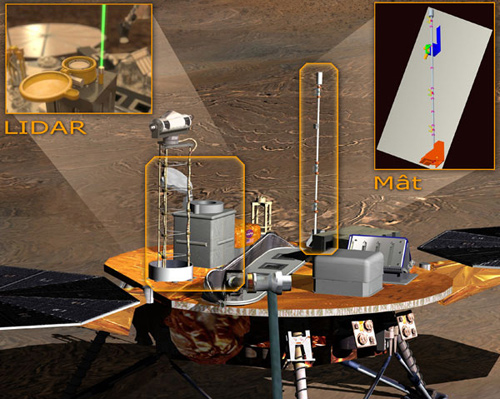 About the lidar instrument:

The science goals were to:

About the meteorology mast:

Like a robotic scientist, Phoenix searched for water in the soil, analyzed the chemical and mineralogical makeup of the Mars terrain and studied the atmosphere. Canada's meteorological station (MET) sat on the spacecraft's table-like deck. Using a laser instrument and a suite of temperature, wind and pressure sensors, the MET tracked daily weather patterns and seasonal climate changes on Mars.

Working with Toronto-based Optech, MDA Space Systems of Brampton, Ontario, was the prime contractor for the shoebox-sized Light Detection and Ranging instrument. The lidar's pencil-thick laser shot rapid pulses of light into the atmosphere, which bounced off passing clouds and dust overhead. The pulses of light were then reflected back to a 10-centimetre optical telescope that was part of the lidar system. The data helped to determine the composition, movement, and size of clouds and particles above the lander.

To be able to pierce through most of the thin atmosphere, the laser was fixed in an upward-pointing orientation and worked at two wavelengths so that it could give accurate measurements of cloud height to within 10 metres. The Canadian science team typically ran the laser for 15 minute periods four times daily in order to determine what time of day clouds began to form around the landing site, and to find out if clouds form at various altitudes at certain times of the day. Though it only required the power of a 30-watt light bulb (with a maximum capacity peaking at 40 watts), the lidar could shoot 20 kilometres high into the Martian atmosphere.

By scanning and probing the Martian polar sky in such detail from the ground for the first time, Canadian researchers saw a variety of atmospheric activity in greater detail than ever before. They looked at ice and dust clouds, ground fog, and seven saw dust devils across the landing site. Researchers are using this unique data from the Red Planet's polar region to create a clearer picture of how water cycles between surface ice and vapour in the atmosphere.

When Phoenix landed near the north polar ice cap of Mars, the Sun was close to its highest point in the sky, providing almost 24 hours of sunshine. Local temperatures were expected to vary between highs of -33ºC to lows of -73ºC or -100ºC degrees.

The weather station had three temperature sensors. Fixed to the mast at different levels, the top sensor was about 2.3 metres above the ground.

The sensors measured temperature by its effect on the flow of an electrical current through a closed circuit. They were built by MDA Space Missions in Brampton.

About the size of a deck of cards, the pressure sensor can took air pressure readings at the Phoenix landing site throughout the day. It was mounted on the side of an electronics box on the deck of the lander.

The air pressure was about 1% of Earth's. Researchers correlated the pressure data with observations from the other sensors to develop a daily weather forecast for the landing site.

The pressure sensor was provided by the Finnish Meteorological Institute.

Who has seen the wind?

Near the top of the mast by a temperature sensor, the wind monitor measured the direction and strength of winds at the landing site. Researchers had to create a small, light device for the lander. Their innovative solution was made of a small tube and a ball. As the wind lifted and moved the ball, onboard stereoscopic cameras captured the movement. The deflection of the ball indicated the wind speed and direction.

Mars has light winds most of the time, about four kilometres an hour. These may pick up to around 15 to 40 kilometres an hour during the day. But visible effects from ferocious winds, up to 150 skilometres an hour, have been recorded. Windstorms have cleared crater-scarred plains, and swept soil into giant dunes six-stories high.

Martian storms carry lots of dust. The Red Planet experiences dozens of dust storms every year. And every five or six years, a storm develops into a monstrous tempest that can cover the entire planet.

The wind monitor, also known as a "telltale," was provided by Denmark's Aarhus University with support from Canadian science team members.