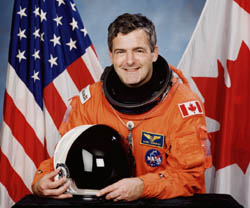 Born in February 1949 in Quebec City, Canada. He received his early education in Quebec City and Saint-Jean-sur-Richelieu in Quebec and in London, England. He received a Bachelor of Science degree in Engineering Physics from the Royal Military College of Kingston in 1970, and a Doctorate in Electrical Engineering from the Imperial College of Science and Technology, London, England, in 1973. He attended the Canadian Forces Command and Staff College of Toronto in 1982-1983.

Marc Garneau was a Combat Systems Engineer in HMCS Algonquin from 1974-76. While serving as an instructor in naval weapon systems at the Canadian Forces Fleet School in Halifax, 1976-77, he designed a simulator for use in training weapons officers in the use of missile systems aboard Tribal class destroyers. He served as Project Engineer in naval weapon systems in Ottawa from 1977 to 1980. He returned to Halifax with the Naval Engineering Unit, which troubleshoots and performs trials on ship-fitted equipment, and helped develop an aircraft-towed target system for the scoring of naval gunnery accuracy. Promoted to Commander in 1982 while at Staff College, he was transferred to Ottawa in 1983 and became design authority for naval communications and electronic warfare equipment and systems. In January 1986, he was promoted to Captain. He retired from the Navy in 1989. He is one of six Canadian astronauts selected in December 1983. He was seconded to the Canadian Astronaut Program from the Department of National Defence in February 1984 to begin astronaut training. He became the first Canadian astronaut to fly in space as a Payload Specialist on Shuttle Mission 41-G in October 1984. He was named Deputy Director of the Canadian Astronaut Program in 1989, providing technical and program support in the preparation of experiments to fly during future Canadian missions. He was selected for Mission Specialist training in July 1992. 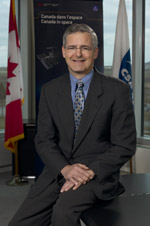 Marc Garneau reported to the Johnson Space Center in August 1992. He completed a one-year training and evaluation program to be qualified for flight assignment as a Mission Specialist. He initially worked on technical issues for the Astronaut Office Robotics Integration Team and subsequently served as Capsule Communicator (CAPCOM) in Mission Control during Shuttle flights. A veteran of three space flights (STS-41G in 1984, STS-77 in 1996 and STS-97 in 2000), Marc Garneau has logged over 677 hours in space. In February 2001, Marc Garneau was appointed Executive Vice President, Canadian Space Agency. He was subsequently appointed President of the Canadian Space Agency, effective November 22, 2001. He resigned from this position on November 28, 2005, to run for office in the federal election.

Honorary Fellow of the Canadian Aeronautics and Space Institute. Member of the Association of Professional Engineers of Nova Scotia, and the Navy League of Canada. He was named Honorary Member of the Canadian Society of Aviation Medicine in 1988 and a Member of the International Academy of Astronautics in 2002. Marc Garneau is the National Honourary Patron of Hope Air and Project North Star and the President of the Board of the McGill Chamber Orchestra.

He was promoted Companion of the Order of Canada in 2003, having been appointed as an Officer in 1984. Named Chancellor of Carleton University (2003). Awarded a Doctor of Science degree, honoris causa, by York University (2002) and the University of Lethbridge (2001). Recipient of the Prix Montfort en sciences (2003); Golden Jubilee Medal of Her Majesty Queen Elizabeth II (2002); NASA Exceptional Service Medal (1997); NASA Space Flight Medals (1984, 1996, 2000); the Canadian Decoration (military) (1980); the Athlone Fellowship (1970); and the National Research Council (NRC) Bursary (1972). Awarded Honorary Doctorates by the University of Ottawa (1997); the Collège militaire royal de Saint-Jean (1990); the Université Laval, Québec (1985); the Technical University of Nova Scotia (1985); and the Royal Military College, Kingston, Ontario (1985). Co-recipient of the F.W. (Casey) Baldwin Award in 1985 for the best paper in the Canadian Aeronautics and Space Journal.