Special contribution by Paul Charbonneau of the Department of Physics, Université de Montréal

In 1843, amateur astronomer Samuel Heinrich Schwabe announced, after 17 years of daily observations, that the number of sunspots varied cyclically, reaching a peak about every 10 years. Swiss astronomer Rudolf Wolf was impressed by this. He spent more than 40 years digging through the archives of astronomical observatories compiling the history of sunspot variations as far back as 1745. This led him to set the cycle period at 11 years rather than 10. (Read an article on solar storms.) 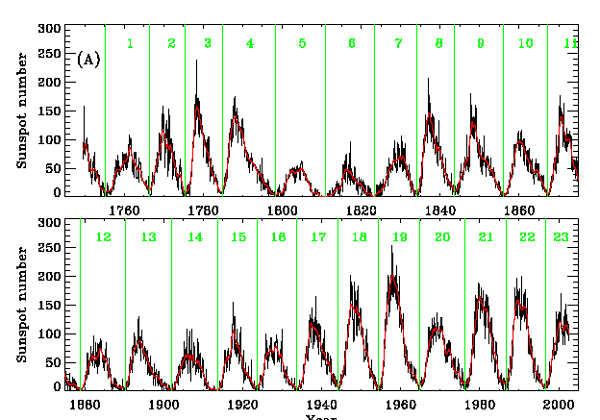 Variation in the number of sunspots over time, from 1745 to the present. The 11-year cycle is clearly visible. Cycles are numbered according to the convention established in the 19th century by Rudolf Wolf. In 2005, the 23rd cycle is in its declining phase.

Many researchers immediately noted that this 11-year cycle matched the well-documented cycle of geomagnetic activity; this marked the beginning of the quantitative study of the Sun-Earth relationship. Not until the beginning of the 20th century, however, was the magnetic nature of sunspots finally established, mainly by George Ellery Hale (1868-1938).

Thanks to progress in spectroscopy, Hale and his collaborators were able to show, that sunspots harbour very intense magnetic fields. These studies continued for nearly two decades and led to a number of discoveries. 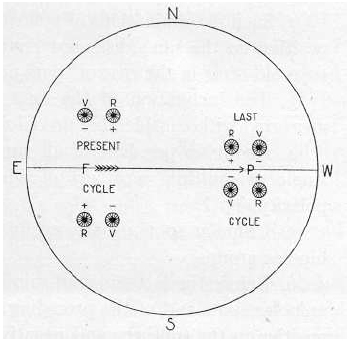 Hale's laws of polarity. The largest sunspots often appear in pairs lying close together and roughly in line with the Sun's rotational direction. Hale and his collaborators established,

Hale's analyses showed that the polarity of the Sun's intense magnetic field reverses every 11 years. A complete magnetic cycle therefore takes place every 22 years, and is manifested, in particular, by the appearance of sunspots.

In 1859, astronomer Richard Carrington became the lucky first to witness a solar flare. These bursts of intense electromagnetic radiation are about 100 times more frequent during phases of maximum activity, when dozen of sunspots may be observed at once; during minimum activity, there may be no spots for several months.

Magnetic fields are the engine-the power source-for all solar activity phenomena. Those inside sunspots are from 1,000 to 10,000 times more intense than the Earth's magnetic field, so intense, in fact, that they slow the movement of energy from deep within the Sun. Logically, then, one might expect the Sun to shine a little less brightly during solar maxima-but just the opposite is observed: the Sun is about 0.15% brighter, though the dark spots are more numerous. There must be other, brighter structures within the Sun's atmosphere that offset any decrease in brightness due to sunspots.

Thanks to the latest space missions, and breakthroughs in optics technology, these structures have now been detected. They are small, intense magnetic field concentrations about 100 km in diameter. (By comparison, a sunspot may reach 10,000 km in diameter, or about the diameter of the Earth.) 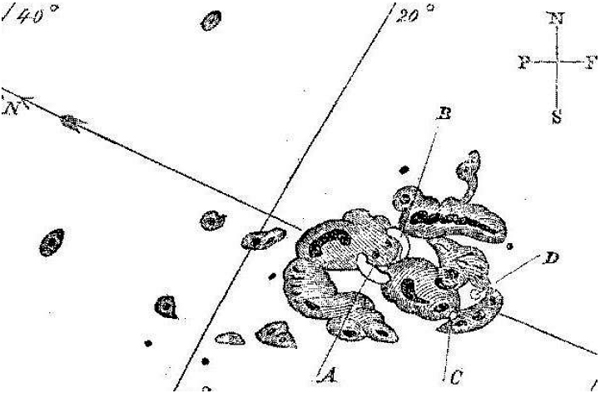 The solar flare observed by Carrington on September 1, 1859. Only the strongest flares can be detected in the visible spectrum. These are seen as two small white spots (A and B). Solar flares are more easily seen in other parts of the spectrum (for example, ultraviolet). Observations are now made from space because the Earth's atmosphere obscures the view from the ground.

Although a series of solar observation satellites has been launch over the last 20 years, many questions have yet to be answered. We cannot predict the temperature and luminosity of a sunspot even when the intensity of its magnetic field is known. We still don't know the origin or structure of the umbra/penumbra demarcation in sunspots. And how deep sunspots are and how the energy flows out to the Sun's surface are also unknown.

Several physical models for the solar magnetic cycle responsible for sunspots have been suggested, but there is no consensus on any one model. The whole story on sunspots has yet to be told.