The Physical Sciences in Space Program of Space Science has the mandate to promote research in a microgravity environment. Various platforms offer such an environment, including parabolic flights, which are relatively inexpensive and very accessible.

What is a parabolic flight?

Parabolic flights can simulate microgravity. These parabolic manoeuvres, executed by modified commercial jets, give the opportunity to obtain short periods of free fall. On the upward arc, the thrust of the airplane is adjusted so that there is no lift: the plane is in free fall since nothing reduces the force of gravity. The plane remains in free fall over the top of the parabola and part of the downward arc. Microgravity conditions are achieved for time periods of 15 to 20 seconds, in which it is possible to conduct experiments. By free floating experiments, low g-levels can be achieved for 5 to 8 seconds.

The Flight Research Laboratory of the NRC implemented the first Falcon-20 parabolic flight program in 1991. The first microgravity experiment onboard a parabolic aircraft flew in December 1993. The CSA continued to use the Falcon 20 until 1995 when, through an agreement with NASA, gained access to their DC-9 parabolic aircraft.

The Falcon 20 is a commercial jet with modified hydraulic and fuel systems to allow it to perform parabolic maneuvers. The parabolas are executed in a restricted area, about 4,000 and 8,000 m in altitude. A typical flight currently consists of four parabolic trajectories that have a total duration of about 45 minutes. Each parabola lasts approximately 75 seconds, of which 15 to 20 seconds are at 0.02 g or less, followed by a 1.8 g pull-out. In addition to simulating microgravity, the Falcon 20 offers additional services to users, such as electrical power and a data acquisition system. The aircraft can accommodate up to three small-scale experiments. 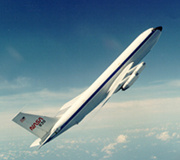 The four-engine Boeing KC-135, similar to the commercial Boeing 707 aircraft, has been modified by NASA to support parabolic flights. The parabolas are performed in a restricted zone, about 8,000 and 12,000 m in altitude.

The Canadian Space Agency leased from 1987 to 1995 the modified Boeing 707 four-engine jet for two campaigns per year from. From 1995 to 1997, the CSA decided to implement a DC-9 parabolic flight program, also leased from NASA.

The Novespace Airbus A300 nearly the same services as NASA's research aircraft.

Successor to the Caravelle ZERO-G, the Airbus A300 is a prototype that served as a test aircraft for Airbus Industrie. The first Canadian experiment to utilise the Caravelle was flying in 1992. 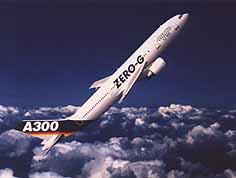 Two other aircrafts included in the CSA's parabolic flight program were the DC-9 and the T-33.

With its first flight in May 1995, this refurbished jet achieved 35 parabolas per flight. In only a few months, the aircraft's range has been extended to 40-60 parabolas per flight as the KC-135. In total 33 experiments were flown over 17 different flight weeks. 16 different groups of researchers were involved with these flights.

The NRC operated this modified jet trainer for one short-duration microgravity experiment per flight. The T-33 flew up to 16 parabolas per flight. Because of its singular experiment capacity, the T-33 was eventually retired, being replaced by aircrafts able to support a greater number of experiments.