Canadian space research: Getting down to the bone with eOSTEO

Gravity has a profound effect on bone tissue. For example, fish have thinner bones than land creatures because the water environment supports their weight.

Over a long period in space, bones become weaker. "Bone cells are not stimulated anymore by the body weight and they start absorbing bone tissue, releasing minerals in the bloodstream. Bones that usually support the body have thinner walls and reduced density, so bone loss is more important in legs and hip than in the arms. In fact, the only arm that does not loose any bone in space is the Canadarm!" jokes Nicole Buckley, Director of Life and Physical Science at the Canadian Space Agency (CSA).

"In space, astronauts can lose up to 10 percent of their bone mass in three months," says Lowell Misener, Project Manager at Systems Technologies, which is similar to advanced osteoporosis on Earth, a condition that affects about 1.4 million Canadians. "But without gravity, bone loss is 10 times faster. And healthy astronauts are not immune to these effects. Space provides us with an accelerated environment for studying bone disease, particularly bone loss."

After 90 days in space, some of the bone tissue that's lost will not regenerate once the astronaut returns to Earth. "A trip to Mars could result in serious fractures," Misener points out.

The CSA has teamed up with industrial and academia partners to design, build and operate a fully automated mini space laboratory to study bone loss in the unique conditions of microgravity, more specifically, to help scientists better understand the bone loss processes. Known as eOSTEO, the hardware was developed by Millenium Biologix Inc. and Systems Technologies, and Orion Canada supported preparations for launch. Academia partners include the University of Toronto and McGill University. eOSTEO is also supported by the Canadian Institutes of Health Research.

eOSTEO will provide the international research community with the right conditions for bone cells to grow in microgravity. Slated for launch on September 14, 2007, two eOSTEO systems will orbit Earth for 12 days aboard a Russian satellite. One houses the Canadian experiments, while the other contains experiments from European scientists. Meanwhile, the same experiments are being conducted on the ground so scientists can compare bone cell growth in space with what happens in the presence of gravity. Canadian ground stations in Longueuil, Quebec, and Saskatoon, Saskatchewan, will also help download data from the satellite.

Research into the causes of bone loss in space may lead to a better understanding of osteoporosis and other diseases on Earth, and advance the search for countermeasures or possibly even cures. The e-OSTEO experiment is an enhanced version of OSTEO, a similar study performed in the shuttle in 1998. Astronauts, including veteran NASA astronaut John Glenn, carried out the experimental tasks. With the skills and knowledge they gained, Millenium Biologix and Systems Technologies developed the automated tissue engineering system. "Every aspect of the tissue engineering system was developed first through OSTEO, in a more simplified way," says Lowell Misener. 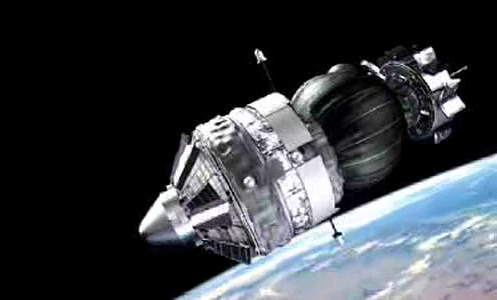