By examining the dust and rock of Mars's ancient environment, this mission is searching for answers to a question that has fascinated humanity for ages: is there life out there in the universe? Canada's APXS instrument will help scientists get a clearer picture of the answer.

Canadian instrument APXS performs tests on the Martian surface to reveal the chemical content of a sample.

The APXS instrument on the Curiosity rover is an updated version of the spectrometers that were successfully used on the Mars Exploration Rover (MER) and Mars Pathfinder missions.

While the MER mission's rovers, Spirit and Opportunity, had only five instruments each, APXS is accompanied by nine other science instruments, including a hand lens imager and a panoramic camera. The Curiosity rover combines both state-of-the-art laboratory instruments and MER-style mobility to roam and explore the planet.

Canada has extended its participation in the Mars Science Laboratory mission to March 2023.

As of June 1, 2020, Curiosity has travelled a distance of 22.1 km on the Martian surface, and its Canadian instrument APXS has analyzed 917 samples and sent 1981 results back to Earth. 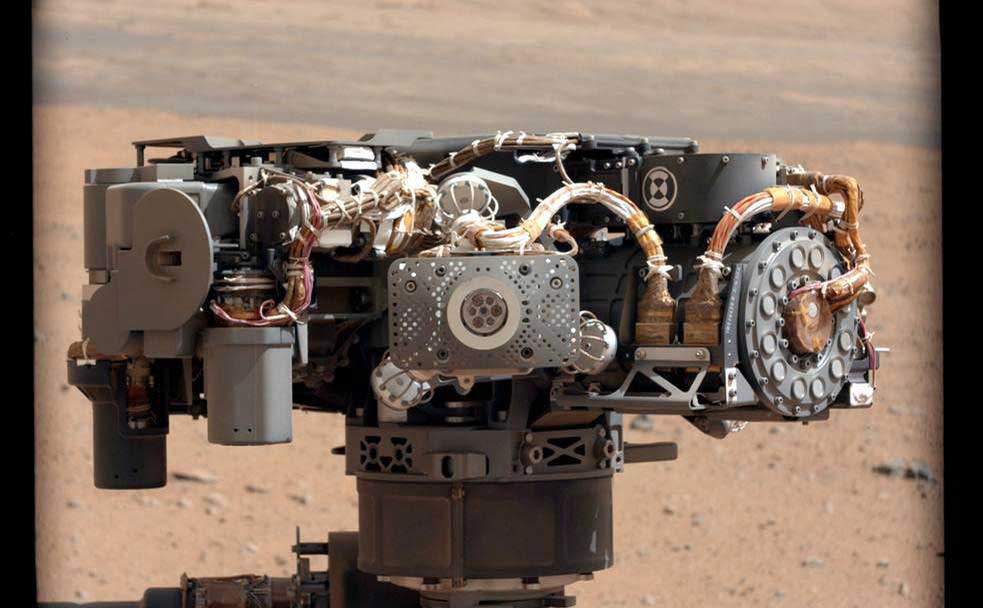 This image shows the Alpha Particle X-ray Spectrometer (APXS) on NASA's Curiosity rover, with the Martian landscape in the background. This image let researchers know that APXS had not become caked with dust during Curiosity's landing. (Credit: NASA/JPL-Caltech/MSSS)

How does APXS work?

Roughly the size and shape of a Rubik's cube, APXS's sensor can gather data day and night.

Located on the end of the Curiosity rover's robotic arm, the sensor is placed close to a sample, which it bombards with X-rays and alpha particles (charged helium nuclei) to study the properties of the energy emitted from the sample in response.

The instrument takes two to three hours to fully analyze a sample and identify the elements it is made of, including trace elements. A quick-look analysis can be completed in about 10 minutes.

APXS is powered by a thermoelectric generator that uses the breakdown of radioactive isotopes to generate a large amount of energy. This means that Curiosity does not rely on solar panels and is able to operate even during the Martian winter. 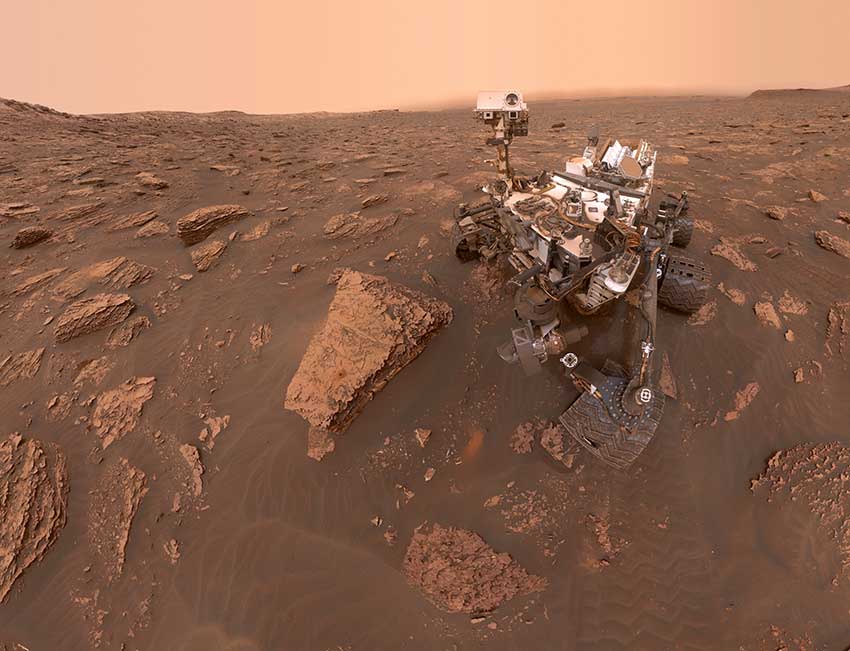 This self-portrait of the Curiosity Mars rover shows the vehicle at Duluth, a site on the lower slopes of Mount Sharp. This view, stitched from multiple images, does not include the arm that holds APXS's sensor. (Credit: NASA/JPL-Caltech/MSSS)

The Principal Investigator for APXS is Dr. Ralf Gellert of the University of Guelph. He provided the scientific design based on similar instruments used during the MER mission (developed at the Max Planck Institute for Chemistry) and leads the APXS science team, which includes scientists from:

The APXS instrument was built by MDA.