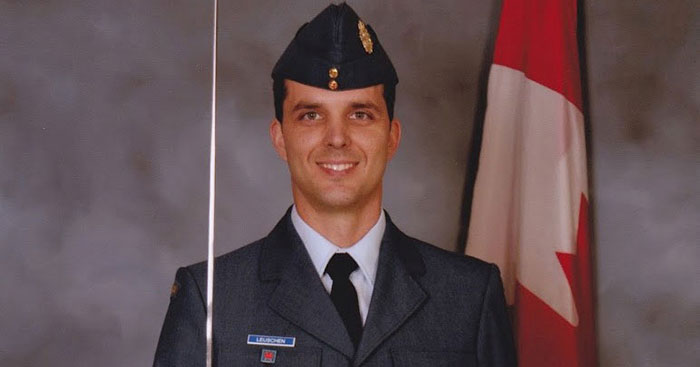 Where were you born?
Murrayville, British Columbia, Canada

Where do you currently live?
Ottawa, Ontario, Canada

Student pilot, Royal Canadian Air Force - I am training to become a helicopter pilot with the goal of flying search and rescue in the mighty CH-149 Cormorant! A good pilot must have in-depth knowledge of the aircraft, regulations and procedures, along with excellent coordination and fitness. Student pilots spend a great deal of time studying for upcoming missions in addition to "flying" flight simulators and practising visualization techniques. Sports and exercise are important to prepare the body for the rigours of g-forces, heat and cold. And occasionally they actually let us fly!

I fell in love with the sky growing up on a farm in The Land of The Living Skies (Saskatchewan, of course). Most days you were treated to an inspiring dawn, which would only be topped by the sunset that followed. Evenings in the field, without an artificial light in sight, I was held in rapture by the Milky Way, the northern lights and the moon. I'd drag my younger brother out to watch meteor showers and ponder our place in the universe. I have wanted to be an astronaut, to get a little closer to the heavens, ever since.

In Grade 1 I stumbled upon science fairs as an outlet for my curiosity. That curiosity took me from baking soda volcanoes to robots via a detour into lasers. Designing and building robots gave me such joy that by Grade 8 I decided engineering was for me. All that remained was picking a specialty, and for someone fascinated by machines, aerospace presented the most extreme challenges. I spent extra evenings and weekends building rockets and working in my university's wind tunnel, eventually turning my passion into my career. To think it all started with a little curiosity!

My Grade 3 teacher, Mrs. Billo, recognized that the boy who kept disrupting her class was doing so because he was restless and bored. She cleverly harnessed my energy by assigning extra projects to occupy my mind (and in the process my mouth). Soon I was preparing learning centres for the class and giving extra presentations on science topics. In the process I discovered that I loved learning and could excel at school, and I've been doing extra homework ever since.

I love the team focus drilled into all members of the Royal Canadian Air Force from their first day. I get to meet great personal challenges with a fantastic team of instructors at my back and supportive peers at my side. The military makes training extremely demanding, in preparation for the environment we may have to operate in, and no one makes it through without help from their team. Despite the competitive nature of the training, each of us is willing to sacrifice to ensure the success of our peers because if they succeed, I succeed.

My real-life heroes are military families. These spouses and children sacrifice time with their loved ones so that they can serve the country. The families have many reasons to worry and few reassurances while their loved ones are away from them. Through it all, most military families wear a brave face and support their members, so they are able to continue to do what they must.

As a child of 1977, Star Wars loomed large across my childhood. Even now I can vividly recall the first time I saw Star Wars on TV and can still feel the excitement and wonder I felt. George Lucas took us into space, and onward to the surface of exciting alien planets. As a child, I built a Millennium Falcon cockpit in my basement and struggled to explain to my brother why his role as Chewbacca was so critical to the story (so I could be Han Solo, naturally).

Along with boots and a flight suit, the military has been kind enough to have issued me a motto as well, Sic itur ad astra: such is the pathway to the stars. Of course I'm trusting the Royal Canadian Air Force on the translation; my Latin is rusty.

As a farmer, my father was definitely more of an ant than a grasshopper and often counselled that there is no such thing as over-preparation. I drove truck for my father while searching for my first post-university job. During downtime while my truck was being loaded, I was studying esoteric wind tunnel books in preparation for a written exam as part of the NRC competition for an aerodynamicist. My extra efforts paid off as I was selected from a national pool of engineers, for one of two positions, and the only successful applicant without a doctorate.

I have a replica of a 1965 Shelby Cobra that I built myself. It is an uncomfortable, unreliable, ill-tempered beast, but it's impossible not to smile when I've got it working just so and the weather is nice. From my greatest frustrations come my greatest victories.

Since flying above it probably doesn't qualify as being "on Earth," I will have to go with my parents' farm, where I grew up, in Bruno, Saskatchewan. Except for when the mosquitoes are in full force.

Becoming a military pilot is my greatest achievement. The challenge started with several mind-melting selection tests leading to a coveted job offer. The three months of sleep and dignity deprivation that are basic training followed. Next was Phase I flight training, where we had too little time to demonstrate too many skills, and 40% of my classmates were washed out. 2015 brought Phase II flight training, a 10-month marathon of learning more than you think you can retain, and doing things with an airplane that initially seem certain to cause instant death, but somehow become routine by graduation.

The Hitchhiker's Guide to the Galaxy by Douglas Adams.