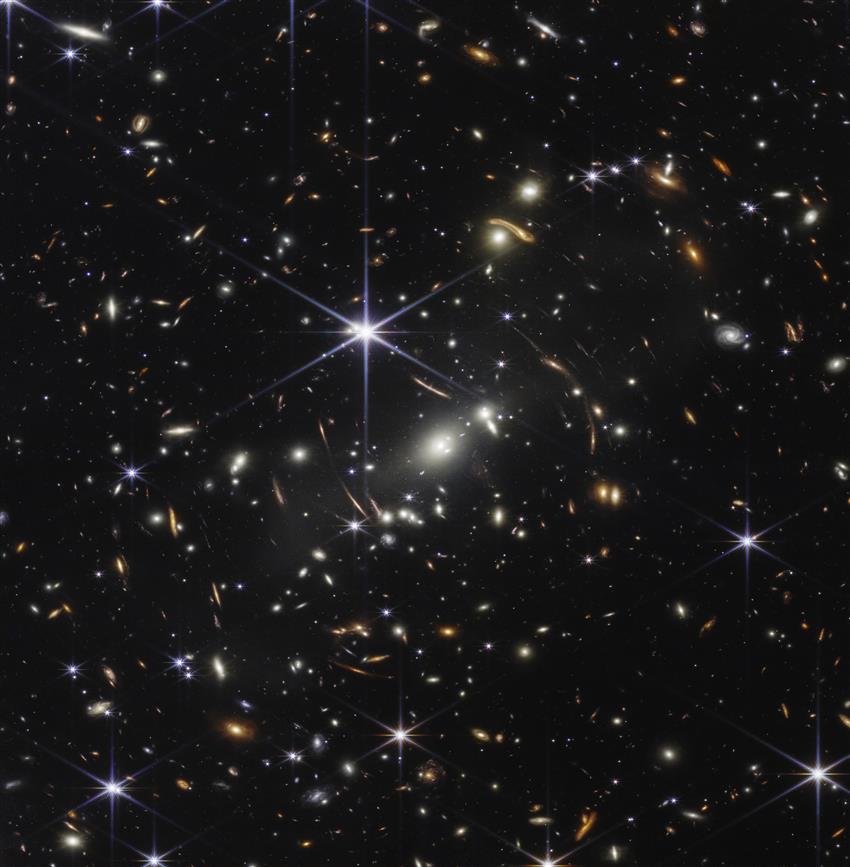 First, focus on the galaxies responsible for the lensing: the bright white elliptical galaxy at the centre of the image and smaller white galaxies throughout the image. Bound together by gravity in a galaxy cluster, they are bending the light from galaxies that appear in the vast distances behind them. The combined mass of the galaxies and dark matter act as a cosmic telescope, creating magnified, contorted, and sometimes mirrored images of individual galaxies.

Clear examples of mirroring are found in the prominent orange arcs to the left and right of the brightest cluster galaxy. These are lensed galaxies – each individual galaxy is shown twice in one arc. Webb's image has fully revealed their bright cores, which are filled with stars, along with orange star clusters along their edges.

Not all galaxies in this field are mirrored – some are stretched. Others appear scattered by interactions with other galaxies, leaving trails of stars behind them.

Webb has refined the level of detail we can observe throughout this field. Very diffuse galaxies appear like collections of loosely bound dandelion seeds aloft in a breeze. Individual “pods” of star formation practically bloom within some of the most distant galaxies – the clearest, most detailed views of star clusters in the early universe so far.

One galaxy speckled with star clusters appears near the bottom end of the bright central star's vertical diffraction spike – just to the right of a long orange arc. The long, thin ladybug-like galaxy is flecked with pockets of star formation. Draw a line between its “wings” to roughly match up its star clusters, mirrored top to bottom. Because this galaxy is so magnified and its individual star clusters are so crisp, researchers will be able to study it in exquisite detail, which wasn't previously possible for galaxies this distant.

The galaxies in this scene that are farthest away – the tiniest galaxies that are located well behind the cluster – look nothing like the spiral and elliptical galaxies observed in the local universe. They are much clumpier and more irregular. Webb's highly detailed image may help researchers measure the ages and masses of star clusters within these distant galaxies. This might lead to more accurate models of galaxies that existed at cosmic “spring,” when galaxies were sprouting tiny “buds” of new growth, actively interacting and merging, and had yet to develop into larger spirals. Ultimately, Webb's upcoming observations will help astronomers better understand how galaxies form and grow in the early universe.

NIRCam was built by a team at the University of Arizona and Lockheed Martin's Advanced Technology Center. (Credit: NASA/ESA/CSA/STScI)