The extreme environment of space is very hazardous to the human body. Through research performed on Earth and on the International Space Station (ISS), we are finding out how radiation, microgravity, isolation and other factors affect the bodies and minds of astronauts. In order to further human space exploration, health science experts are hard at work to understand how humans can safely spend more time in space.

Their research also benefits people on Earth, because the effects of long-duration space flight are similar to health challenges caused by aging, isolation and a sedentary lifestyle.

What does a health science expert in the space sector do?

Clinical support encompasses everything that involves the health and safety of astronauts in space. This includes nutrition, exercise regimens and overall health concerns.

2. Conduct research on how space affects human health and other living organisms

Researchers study the effects of microgravity and space on human health (physical, mental, and social), using human participants as well as model organisms. They seek to learn more about:

That sort of research is necessary to develop countermeasures that will mitigate or eliminate risks associated with space flight, an essential step in preparing for future long-term space missions to deep-space destinations like Mars. Researchers also strive to find solutions for such problems as medical emergencies in space.

What should I study to become a health science expert in the space sector?

As with all space careers, there are many paths you can take depending on the work you wish to do. Here are some of the programs of study you could choose:

What are some of the fields of work of health science experts in the space sector?

Here are some of the many life and health science disciplines that are critical to advancing knowledge in the space sector and providing astronauts with clinical support.

Physicians monitor the health of astronauts. They are involved in designing training programs for astronauts preparing for a mission and monitoring their health in orbit. They work with scientists and engineers to develop and test space flight equipment for the astronauts' well-being, such as the antigravity suit, which helps prevent astronauts from fainting when they return to Earth.

Doctors also assess the health effects of prolonged space flight on astronauts upon their return to Earth. Since the human body reacts in many different ways to variable gravity conditions (stronger gravity during launch and landing, microgravity in orbit, and reduced gravity on the Moon and Mars), astronauts undergo a medical exam on returning to Earth and are re-examined a few days later.

Does medicine interest you? There is a medical specialist for each function of the human body. Here are some examples:

Physiologists research the effects of space flight on human health. Using astronauts as their subjects, they design experiments that are conducted before, during and after space missions. They use specialized equipment and tests while the astronaut is on Earth, and prepare tests that the astronaut will conduct on themselves in space.

Their findings are crucial to developing countermeasures that will keep astronauts safe during long-duration missions to further destinations in the solar system. People on Earth also stand to benefit, especially those with symptoms brought on by illness, aging or physical inactivity that are similar to the effects of prolonged space travel.

Does physiology interest you? Here are some fields you could specialize in:

Kinesiologists contribute to keeping astronauts healthy by ensuring individual follow-up to assess their health and lifestyle. They advise astronauts and prepare a physical fitness plan for them that includes specific exercises to help them deal with the effects of microgravity, such as the loss of bone density. Kinesiologists may also conduct research on physical activity and health.

Nutritionists educate people on food choices and promote a healthy lifestyle through healthy eating. In the space industry, nutritionists create personal menus for each astronaut during their mission.

They also work with food scientists to develop foods for space flight. A number of criteria are taken into account, including shelf life, storability, and nutritional value.

Nutritionists also play a role in researching the metabolism of food and nutrients, interactions between the microbiome and food, and practical aspects of food supply such as preservation.

Biologists are experts on living organisms, be they plants or animals. Through their research, they hope to increase scientific knowledge in their own field and potentially other fields as well.

In the space field, biologists conduct research and experiments to learn more about how living organisms work. For instance, studying cells in space could improve understanding of the human immune system and the effects of weightlessness on vision and movement—and perhaps even lead to advances in treating diseases like cancer.

Furthermore, deep-space missions to destinations such as Mars will require astronauts to grow their own food. Studies are being performed aboard the ISS to better understand how plants grow in microgravity to prepare astronauts for autonomous gardening in the future.

Microbiologists conduct research on micro-organisms (viruses, fungi, bacteria, etc.) to contain the spread of harmful micro-organisms or to serve other purposes, particularly in the areas of medicine (new drugs) and agriculture (feed yeast).

Experiments in microgravity are exciting for microbiologists, as they pave the way for new discoveries that would not be possible on Earth. Past experiments on cells have allowed us to understand certain changes observed in humans in space.

Microbiologists also study the impact of space travel on astronauts' microbiomes (the collection of microbes that live in and on the human body).

Does microbiology interest you? Here are a few specializations:

Neuroscientists and psychologists conduct experiments to study human behaviour in space. Microgravity conditions cause a number of changes in the human body, including disorientation, loss of balance, backaches, and headaches resulting from blood flow to the upper body. How do astronauts react to these effects?

Psychologists and social psychologists also study the behavioural effects of long-term missions, high-stress conditions during the voyage, and cramped quarters in manned space vehicles. For example, Canada's At Home in Space experiment examines some of the psychological effects of living in space for long periods of time. 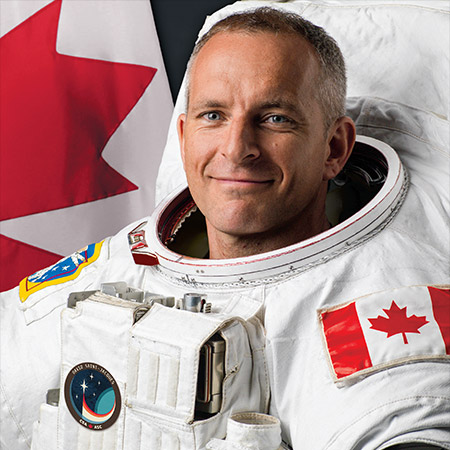