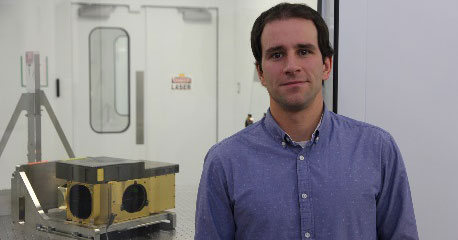 Where were you born?
Beauceville, Quebec, Canada

Where do you currently live?
Quebec City, Quebec, Canada

As the instrument systems engineer, I work closely with scientists to define what the instrument will be capable of doing. I also lead and define the work to be achieved by specialty engineering disciplines such as electronics, optics and mechanics throughout the execution of the project.

As an engineer and explorer, becoming an astronaut is simply the most appealing job there is, whether it is on the ground preparing for a mission or in space performing experiments and reaching out to fellow Canadians. Being an astronaut would allow me to test and operate some of the most complex systems ever designed and to make a difference in the lives of people on Earth.

It was the challenge and the possibility of improving technology in so many areas: telecommunications, optical instrumentation, computers, control systems and even more!

One of my high school science teachers encouraged me to take part in the regional science fair and in student projects. This is where I made great friends, had so much fun and learned early on what a career in science and technology would be like.

The fact that I have the chance to make a living from building instruments that will fly in space and to do this through collaborating with colleagues from Canada and from other countries. Also the fact that I work closely every day with so many qualified and dedicated people.

My personal hero is Quebec playwright Robert Lepage. Watching his plays deeply moves you as a human being and also shows you that there are no limits to genius, innovation and talent. He was a young man who grew up in a Quebec working-class neighbourhood and later became an ambassador of Canada at the international level.

You always have to work hard to reach your goals.

Canadian singer-songwriter Sam Roberts said that "there is no road that ain't a hard road to travel on."