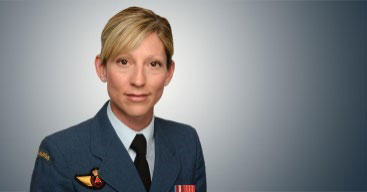 Where do you currently live?
Kanata, Ontario, Canada

Aerospace engineering officer, Canadian Armed Forces - I have specialized in space through my work on space projects (operational and research systems) and on developing space strategies/policies. I worked at the Canadian Space Agency as a mission planner and at the MIT Lincoln Laboratory Millstone Hill Radar as an orbital analyst. During my career in the Forces, I was also senior engineering and aircraft maintenance officer at 424 Transport and Rescue Squadron, where I was responsible for more than 100 aircraft technicians and two fleets (CC130 Hercules and CH146 Griffon).

This would be the most exciting space job! I have worked in several areas of the space field. Becoming an astronaut would allow me to apply my knowledge while learning new skills.

I am an ambassador for space and have undertaken an awareness campaign to better inform people about what space is bringing us. As an astronaut, I could reach the public and promote the Canadian space program.

I want to inspire people to follow their passions, especially young Canadians. I want to encourage young women to pursue careers in STEM. As a female astronaut, I would be a model for them.