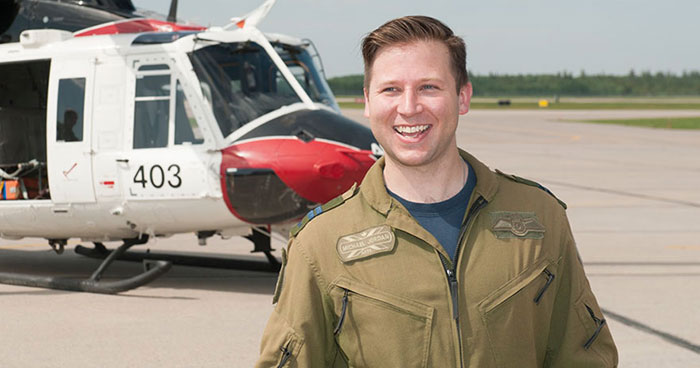 Where were you born?
Halifax, Nova Scotia, Canada

Where do you currently live?
Jupiter, Florida, USA

My goal of becoming an astronaut has been with me since my earliest memories. I never questioned that goal, but knew I needed to do everything in my power to achieve it. Gaining knowledge about our place in this vast universe, I became increasingly compelled to venture past the boundaries of this "pale blue dot" we call home. The human species seems to be at the cusp of embarking on an evolutionary step that will define our continued existence. It would be an honour to be a part of that step and to share the journey with the world.

Pursuing a piloting career, and becoming a military test pilot, was always my assumed path to becoming an astronaut; I never seriously considered any other career, but knew that I would need an academic background commensurate with the requirements of the space program. I was born with an innately logical mind, and have always gravitated towards the STEM curriculum. I found comfort in the scientific method and the derivation of incontrovertible truths. As I further refined my areas of interest, I discovered that computer software engineering was a limitless field that rewarded creative logic in the pursuit of efficient design.

Independent of location (I moved around a lot growing up), the more memorable teachers/professors always seemed to reflect the passion that they saw in their students. Several of my early math and science teachers saw that I had an aptitude for STEM; they guided my logical/inquisitive nature and urged me to challenge myself with advanced study. The most positive impact came from teachers who challenged me to gain a deeper understanding of the material; they steered me towards constant curiosity and taught me that asking "why" (and occasionally challenging convention) was a path towards truly enjoying education.

As a qualified test pilot, I enjoy the balance between research, theory, engineering, and validation. Whether testing a new aircraft or modifications to an existing one, I enjoy working with others to achieve a set of objectives. The process of predicting behaviours/results, defining a plan to test the predictions, and flying the plan to collect truth data is extremely satisfying. I am fortunate to have the opportunity to collaborate with so many outstanding individuals, with specializations across diverse disciplines – also satisfying is that the coalescence of many technically minded people leads to very interesting discussions about the future of technology.

While it would be easy to admire the accomplishments of present/past astronauts or test pilots (and the entrepreneurs, scientists, and engineers who envision/develop the technologies that enable the exploration of space), I feel that true admiration requires a more personal understanding of an individual. To that end, the person I admire the most is my father; he has, throughout his life and military career, acted in a manner that upholds the highest levels of personal integrity and honour. Through a largely passive influence, my father's unwavering personal values, and moral compass, became ingrained as part of my ethos.

Mission to Mars (2000), starring Gary Sinise, Tim Robbins, Don Cheadle, and Connie Nielsen
Mission to Mars was released during my second year at the Royal Military College of Canada. I saw it seven times in the theatre (amidst a heavy curriculum) and have watched it several times per year since then. While the movie had some questionable tangents, the spirit of exploration/teamwork portrayed by the cast resonated with me. At the time, the movie also offered the most dramatic visualization of Mars I had ever seen; Mars itself became one of the main characters – a most beautiful and inviting one.

A quote from Polonius in Shakespeare's Hamlet: "This above all: To thine own self be true, and it must follow, as the night the day, thou canst not then be false to any man."

I have been well served by staying honest with myself; I aim not to exaggerate my accomplishments nor diminish them unjustly. Defining realistic goals, and evaluating them within the bounds of what I believe to be possible for me, has helped me approach each step of my career with reasoned optimism about the outcome.

I recall, at an early age, that my father told me that I needed to work hard so that I could pursue a career that I loved; he then said, "If you do not love what you are doing in life, then you are not doing what you are meant to do." Though the advice is likely quite common, my father delivered it effectively. Knowing that I wanted to become an astronaut, I knew that I would not love doing anything that did not directly contribute to that goal – this made for relatively simple life choices.

I have a passion for transformative technology; to that end, I have collected many unique items throughout my life – classic video games, defining pieces of computer technology, various pieces of space-related collectables, a Signature Series Tesla Model S, etc. – but I do not treasure those possessions. Worldly possessions are satisfying to own and can provide comfort, but what I treasure most are the experiences and relationships that I have had in my life (and the opportunities afforded by them as I look to the future).

Oddly, given that I have travelled to over 30 countries (across 6 continents), I don't really have a "favourite place." I find pleasure/satisfaction wherever I happen to be, and take joy in the small things I notice around me. I have never longed to be anywhere (on this surface of this planet) other than where I find myself; perhaps this is because I know that I am always in a place that is contributing to achieving my dream of becoming an astronaut. If being in orbit could be considered "on Earth," that would easily be my favourite place.

While I have achieved many things that have led me to this point in my career, I feel that I am on the path to my greatest achievement as I fill out this questionnaire. To be considered for the opportunity to represent Canada, as an ambassador to space, is the fulfillment of a childhood dream; every step towards that dream will become my greatest achievement. I hope to culminate this journey with a step that takes me to the surface of Mars, though even then I would be looking beyond the red planet, to the next challenge.

At present: Andy Weir's The Martian (with original cover art).

I have spent most of my life favouring non-fiction (A Brief History of Time, The Elegant Universe, Faster Than the Speed of Light, GEB, etc.), but The Martian has become my favourite due to the fact that it may well be remembered as a catalyst for a global level of support towards the next frontier of space exploration. I believe that the immense success of The Martian is an indication that the general population is ready to support the agencies (and corporations) that aim to make humans a multi-planetary species.