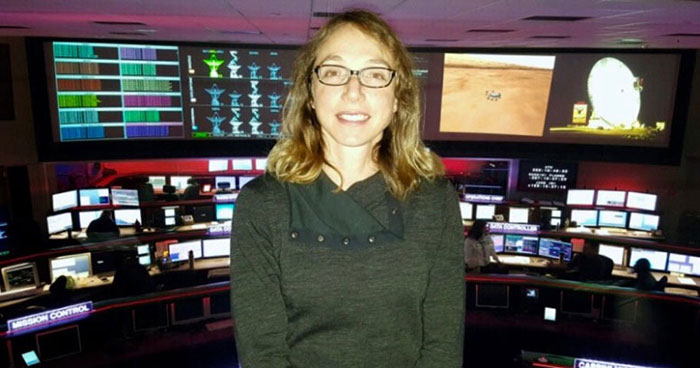 Where do you currently live?
Pasadena, California, USA

Navigation engineer, NASA Jet Propulsion Laboratory - Since fall 2014, I have been the orbit determination lead on the NASA Cassini mission, which has been orbiting Saturn since 2004. My tasks involve estimating the spacecraft trajectory and associated parameters, and quantifying uncertainties. The trajectory information is used for instrument calibrations, science analyses and planning, and maneuver design. This past summer, I also supported navigation and comet landing of the ESA Rosetta mission, and prior to that, navigation of the JAXA Hayabusa2 mission, which launched in 2014 and will reach the asteroid Ryugu in 2018.

I have always been fascinated by space. Over the past decades, we have launched spacecraft to almost all destinations of our solar system. And we are now in a period of time where working and living in space is within reach: we have learned to work in low Earth orbit, and through research and experiments, have made an impressive number of discoveries and scientific advancements. I believe our society should continue expanding beyond the Earth-Moon system, and I want to be involved and contribute to that development and exploration of space.

From a young age, I have enjoyed mathematics and science, and solving problems while discovering new things! I decided to pursue mechanical engineering, as I wanted to learn about different fields such as aeronautics, orbital mechanics, and propulsion. In the early 2000s, I got fascinated by the NASA landing of the NEAR Shoemaker spacecraft on asteroid Eros. I then pursued research on formation and evolution of binary asteroid systems and spacecraft operations around them. This led to a postdoc at JAXA and further space mission development work.

The most influential teacher I had was my Secondary 5 mathematics teacher. This teacher suggested investigating various theorems and proofs as extracurricular activities, and this greatly helped me develop and augment my scientific curiosity.

I need to add that my next most influential professor was my graduate studies advisor, with whom I still work today, who introduced me to small body research, space mission applications, and different space communities.

I love working on various spacecraft missions exploring different destinations of our solar system. Each mission is different, exciting and challenging in its own way; for instance, orbiting Saturn is much different from trying to orbit an asteroid or a comet! I have been working on Cassini for the past four years, and it has been an impressive journey and a great learning experience to fly such a complex trajectory. After twelve years, the mission is still making unique and incredible measurements and discoveries, and it is extremely enriching to be a part of it.

Our Canadian astronauts have been a great source of inspiration over the years, but Julie Payette's selection in 1993 brought the astronaut profession closer to home, made it reachable, and turned her into an important role model. I was fortunate to graduate from McGill "with" her, as she spoke at our graduation ceremony. Her closing statement—"It's just the beginning"—gives me motivation still today. Other "local" heroes also inspire me on a daily basis. For instance, I have raced with many great cyclists, some of whom have broken world records while continuing successful careers. Their dedication is very inspiring.

I have watched Star Wars a number of times, and those first older three movies are close to my heart. However, the recent box office hit Arrival might have become one of my favourites. I liked how it dwelled on the complexity of communicating between species, and how it introduced time in a linguistic dimension.

Keep on going but keep it cool.