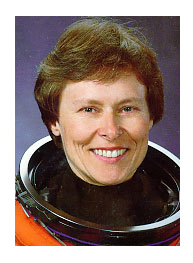 Special honours: Awarded an Ontario Graduate Fellowship in 1971, a National Research Council (NRC) Scholarship from 1971-74, an NRC Postdoctorate Fellowship in 1974, an Ontario Ministry of Health Fellowship in 1981, a Medical Research Council Fellowship in 1981 and a Career Scientist Award from the Ontario Ministry of Health in 1982. She was named honorary member of Zonta International in 1984 and of the Canadian Federation of University Women in 1985. She won the Vanier Award for her selection as an outstanding young Canadian by the Jaycees of Canada in 1985. She was co-recipient of the F.W. (Casey) Baldwin Award in 1985 for the best paper in the Canadian Aeronautics and Space Journal and was made honourary life member of Girl Guides of Canada in 1986. She was awarded a D.Sc. (Honoris causa) in 1989 by Mount Allison University, Sackville, New Brunswick.

Experience: Dr. Bondar is a neurologist and a clinical and basic science researcher in the nervous system. As an undergraduate student she worked for six years for the then federal Fisheries and Forestry Department on genetics of the spruce budworm with reference to the visual system. After internship in internal medicine at Toronto General Hospital, she completed post-graduate medical training in neurology at the University of Western Ontario and in neuro-ophthalmology at Tuft's New England Medical Center (Boston) and at the Playfair Neuroscience Unit of Toronto Western Hospital. Dr. Bondar specialized in Carotid Doppler and Transcranial Doppler, at the Pacific Vascular Institute, in Seattle, Washington, 1988. She was appointed assistant professor of medicine (neurology) in 1982-84.

She is one of the six Canadian astronauts selected in December, 1983 and began astronaut training in February, 1984. In 1985 she was named chairperson of the Canadian Life Sciences Subcommittee for Space Station. She served as a member of the Ontario Premier's Council on Science and Technology. She is a Civil Aviation medical examiner and a member of the scientific staff of Sunnybrook Health Science Centre. She is conducting research into blood flow in the brain during microgravity, lower body negative pressure and various pathological states. In early 1990, she was designated a prime Payload Specialist for the first International Microgravity Laboratory Mission (IML-1). Dr. Bondar flew on Discovery during Mission STS-42, January 22-30, 1992 where she performed experiments in the Spacelab and on the middeck.