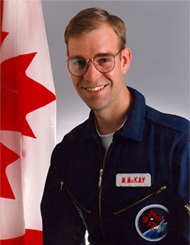 Michael McKay started his career with the Canadian Forces at the Royal Military College where he became an Aeronautical Engineer. In 1992, he was selected along with Julie Payette, Dave Williams and Chris Hadfield as one of four new Canadian astronauts. He resigned as an astronaut in 1995, but remained active in the program until 1997 working on projects such as the Space Vision System and the robotic arms for the International Space Station. After leaving the military in 2001, McKay joined the private sector where he's been taking on various challenges ever since. (With files from Scouts Canada.)