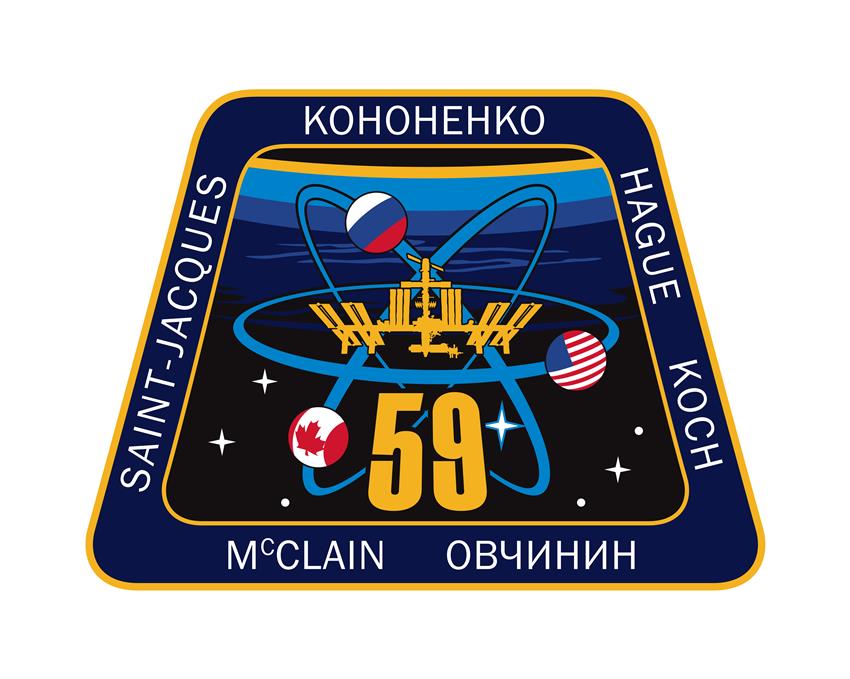 The Expedition 59 patch celebrates the International Space Station’s (ISS) role as a microgravity science laboratory. The crew, made up of scientists, doctors, engineers and pilots, will conduct hundreds of experiments for the benefit of mankind and our fragile environment on planet Earth.
The patch shape depicts the cupola windows. Through these windows, astronauts have made many significant observations of Earth’s ecosystems and they have discovered and documented real-time events like volcanic eruptions and earthquakes.
The position of the Earth at the top of the patch depicts where the Earth would be seen by an astronaut from the cupola. It represents the explorers’ unique perspective on his or her home. The image at the center of the patch is the ISS itself, the largest single structure humans have ever put into space, an engineering marvel.
The ISS is overlaid on an atom, the basic building block of all matter. The atom has three electron orbits with the flags of Russia, the United States of America, and Canada, representing the home countries of the Expedition 59 crew. Like electrons in an atom, international cooperation is the basic stabilizing force that enables large scale space exploration.

To achieve great deeds, humans from all across the globe must work together in peace with a shared vision. The Expedition 59 patch celebrates the massive scientific accomplishments of the ISS while highlighting the importance of global teamwork in understanding our planet and continuing with bold exploration in the future. (Credit: NASA)