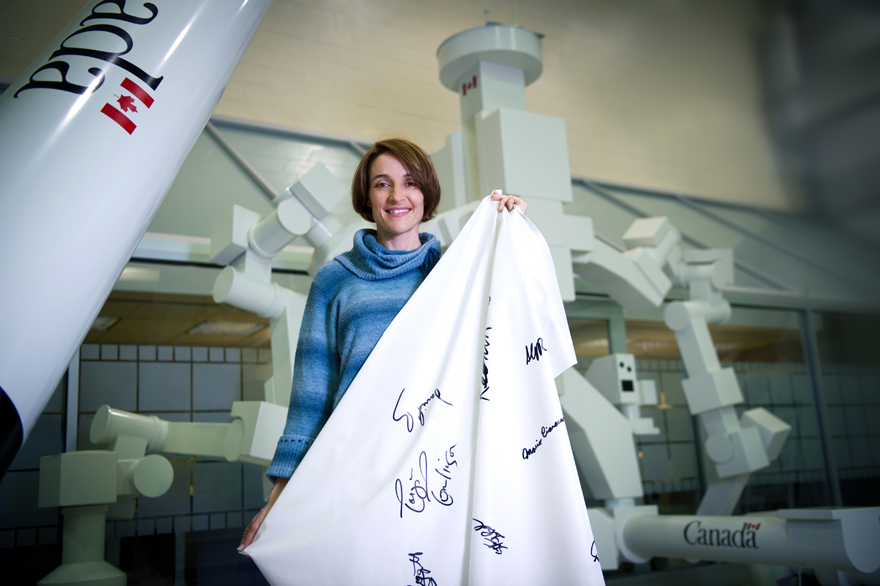 My son was just little when I started working on Dextre. So I used to tell him: "I have to go to Toronto, I'm going to see Dextre". And he thought that Dextre was another child.

But kids are amazingly resilient and he was happy that I was working so hard on Dextre and that Dextre was going to go to space. But it was really hard for him to accept that Dextre would never come back. That brought tears to his eyes.

A really amazing moment happened. Everybody on the team got to sign the blanket that was going to be put around Dextre. It's this white cloth that covers Dextre. Once signed, I had it in the car to bring with me on the plane, and my son said, "What is that?" And I said, "It's a blankie for Dextre. It's got everybody's signature on it, and he's going to bring his blankie with him to space." It made it all okay. He'll never forget that.

Taryn Tomlinson is a mechanical engineer with a master's in radio and space science. She has worked in the RADARSAT program as a summer student, was the lead for Dextre's hardware testing, developed rovers, and now manages a team working on a project for the International Space Station. She is the mother of two young boys.

What is unique about your job?
One minute, we're discussing a critical problem on a spacecraft, and the next, we're talking about the constraints associated with putting humans on Mars!

Which professional accomplishment are you the most proud of?
Co-founding and running my own business in the high-tech field in 2002.

Who or what helped you the most throughout your career?
I've had many mentors and role models throughout my career, from teachers to bosses to colleagues. I try to always surround myself with inspiring people.

What advice would you offer to girls or women?
Live your life and pursue your career like you're on a jungle gym, not a ladder. Explore, change it up, push your limits, laugh at your mistakes, and, above all, get your hands dirty.