When Phoenix landed near the north polar ice cap of Mars, the Sun was close to its highest point in the sky, providing almost 24 hours of sunshine. Local temperatures were expected to vary between highs of -33ºC to lows of -73ºC or -100ºC degrees.

The weather station had three temperature sensors. Fixed to the mast at different levels, the top sensor was about 2.3 metres above the ground.

The sensors measured temperature by its effect on the flow of an electrical current through a closed circuit. They were built by MDA Space Missions in Brampton.

About the size of a deck of cards, the pressure sensor can took air pressure readings at the Phoenix landing site throughout the day. It was mounted on the side of an electronics box on the deck of the lander.

The air pressure was about 1% of Earth's. Researchers correlated the pressure data with observations from the other sensors to develop a daily weather forecast for the landing site. 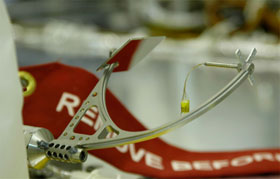 The pressure sensor was provided by the Finnish Meteorological Institute.

Who has seen the wind?

Near the top of the mast by a temperature sensor, the wind monitor measured the direction and strength of winds at the landing site. Researchers had to create a small, light device for the lander. Their innovative solution was made of a small tube and a ball. As the wind lifted and moved the ball, onboard stereoscopic cameras captured the movement. The deflection of the ball indicated the wind speed and direction.

Mars has light winds most of the time, about four kilometres an hour. These may pick up to around 15 to 40 kilometres an hour during the day. But visible effects from ferocious winds, up to 150 kilometres an hour, have been recorded. Windstorms have cleared crater-scarred plains, and swept soil into giant dunes six-stories high.

Martian storms carry lots of dust. The Red Planet experiences dozens of dust storms every year. And every five or six years, a storm develops into a monstrous tempest that can cover the entire planet.

The wind monitor, also known as a "telltale," was provided by Denmark's Aarhus University with support from Canadian science team members.