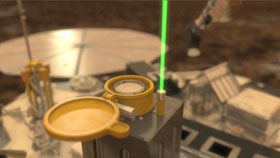 Like a robotic scientist, Phoenix searched for water in the soil, analyzed the chemical and mineralogical makeup of the Mars terrain and studied the atmosphere. Canada's meteorological station (MET) sat on the spacecraft's table-like deck. Using a laser instrument and a suite of temperature, wind and pressure sensors, the MET tracked daily weather patterns and seasonal climate changes on Mars.

Working with Toronto-based Optech, MDA Space Systems of Brampton, Ontario, was the prime contractor for the shoebox-sized Light Detection and Ranging instrument. The lidar's pencil-thick laser shot rapid pulses of light into the atmosphere, which bounced off passing clouds and dust overhead. The pulses of light were then reflected back to a 10-centimetre optical telescope that was part of the lidar system. The data helped to determine the composition, movement, and size of clouds and particles above the lander. 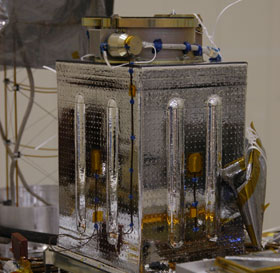 To be able to pierce through most of the thin atmosphere, the laser was fixed in an upward-pointing orientation and worked at two wavelengths so that it could give accurate measurements of cloud height to within 10 metres. The Canadian science team typically ran the laser for 15 minute periods four times daily in order to determine what time of day clouds began to form around the landing site, and to find out if clouds form at various altitudes at certain times of the day. Though it only required the power of a 30-watt light bulb (with a maximum capacity peaking at 40 watts), the lidar could shoot 20 kilometres high into the Martian atmosphere.

By scanning and probing the Martian polar sky in such detail from the ground for the first time, Canadian researchers saw a variety of atmospheric activity in greater detail than ever before. They looked at ice and dust clouds, ground fog, and seven saw dust devils across the landing site. Researchers are using this unique data from the Red Planet's polar region to create a clearer picture of how water cycles between surface ice and vapour in the atmosphere.